What’s up with band rules? Only one member can date a girl, as in, even if she is an ex from someone in the band, no one else in the band can date her?
I was with my ex for 3.5 years, until I got pregnant. He didn’t take responsibility, but I wanted the baby. I moved out and kept it. Went through everything alone – pregnancy, labor, and am now a single mother while he’s out every night being a "rock star".
I’ve gotten used to it. None of his friends know the situation at all.
He’s been playing with this one band for almost a year. I always liked their Guitar player, but obviously I’m not going to do anything about it. The other night I saw him out, said hello, maybe flirted a
little and we ended up hooking up… no sex, just lots of making out (in public none the less) and touching and all that stuff. He was really into me. He asked me how I knew “T” (my ex; their drummer). I said we were “just friends”. He asked
for my number and called me the next day. We talked for an hour. We got it off like CRAZY! Made plans to hang out, etc and of course was freaking out, because I was talking to someone that is exactly what I need, but it’s based on a lie. So I was going to tell him.
That night my voice shut down. Later that night, my ex called and said "what’s wrong with your voice? Maybe it’s because you were making out with “R” last night?"
So now I’m an evil liar, according to some people. R sent me a text saying I’m evil and have a kid with his drummer, and now I wanna go out, to lose his number and to have a nice life.
The kid is mine and mine alone. The only thing that was contributed by T were the 23 pairs of chromosomes.
To top this off, my ex wants to get back together with me now.
SO this is really bothering me. I’m not sure if this is the kind of thing I should be asking you or what my question is really, but do you think this is a lie, a loyalty thing, or everything all together? Plus, why do men change their minds so damn quickly?
Sick of it All

Musicians can be fickle babe magnets ^

A.
I would text R and say "I said he and I are FRIENDS, and that is ALL we are. I didn’t lie, just didn’t want to spoil our whirlwind with to many facts about the past" You didn’t LIE! Men can be wimpy at times.
Send him the text and see what happens. If you want you’re ex back, make him work for it. Making out with his drummer stirred up his competitive side.
Don’t be so hard on yourself! You are hot, that is obvious.
You could have either one if you play your cards right.
Don’t text him any more than once, too many words make men run, they like things SIMPLE. Also, men are fickle; they change their minds more often than they change their underwear, get used to that.
Ps. Do NOT apologize to any of them, or ANYONE!

Q.
I am facing a dilemma I have no clue how to handle, and it’s getting
quite frustrating. This is what’s going on:
I am completely in love with my girlfriend. Though we have only been together for a year, we spend every day together, and I would love to do so for the rest of my life. I am in no way unsure of my emotional feelings toward her, but I have another problem.
I don’t know why, but I have always been very interested in sodomy. I don’t know why, it’s not a conscious decision.
She has given me head a few times, though she has only done it until I came on two separate occasions. One time she swallowed, and the other time she didn’t. I know how other people’s sex lives are often void of oral, so I don’t see myself as incredibly unfortunate, but there’s one thing that tips the scales, and that is that I frequently go down on her. It’ll usually happen about 3-4 times a week, if not more, and it’s not very rare for twice in a day.
Don’t get me wrong, I love doing it, and I am very good at it, as she comes every time. But I feel like our sex life is very one sided. I’ve tried talking to her about it, but all I get are answers like, "I just don’t feel like it" or "Do we have to do it all the time for our sex life to be good?" (I don’t understand how that last one even applies though, because she’s getting some practically every night.) I don’t know how to stress this point well enough to her, without seeming like a sex hungry jerk. I also suffer from the fact that I was in a different relationship about two years ago, and that girl gave me head all the time, (almost nightly) and we did anal once. (That’s when I got my thing for it.)
I guess my question is what makes you enjoy giving head? I love giving her head, and I’ve asked her once, maybe twice, if she liked doing so to me, and all I get is an "I don’t mind." I feel very unsatisfied, and seeing as I please her with my tongue on an almost nightly basis, I feel she should do the same.
I do not want a "Doing it because I have to" blowing though. That sounds horrible.
Hungry for Head

A.
First of all, stop eating her out. When she asks why you stopped, tell her "I don’t feel like it" or "do I have to in order for our sex life to be good?"
She should get the fucking message loud and clear. She is selfish and spoiled by your eager mouth.
I really think you want anal sex because it reminds you so much of your ex who satisfied your oral cravings, like a good girlfriend should.
Look what happened to Bill Clinton when he wasn’t getting head from Hilary. Stop giving and you will start receiving.
It is clear you are more into her, then she is into you. She is obviously into sex, as she lets you lick her clean every night, so it just boils down to her being selfish and just not into your cock like she should be. 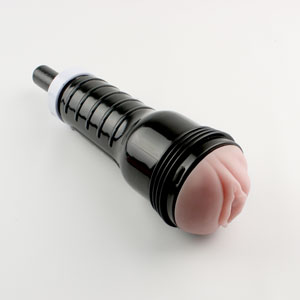 < The ‘Blow Job machine’ in case she refuses

I have a question on etiquette for casual-sex pals. By "pals" I mean that the only kind of interaction I have with this person is purely sexual (aside from the pleasantries of "how are you" on the way in and "have a good day" on the way out. Even though I’m sure to be equipped with the appropriate prophylactic, my pal brings over condoms. He throws the four or five condoms on the floor near where we’re getting it on. If we happen to just use one condom, he’s always sure to grab the three or four unused condoms on the way out. Now, something about that act seems almost rude. It’s like when you bring over a cake or a bottle of wine to Simeon’s house for dinner: you don’t take the leftovers home with you.
Do you think it’s rude to take home the unused party favors, even if they’re condoms?
Condom Snob

A.
It is tacky to take the unused condoms with you. It’s like saying "I will definitely need these between now and the next time I will be in you, and I am definitely too cheap to buy new ones for my new conquests." The only thing worse would be for him to come empty handed and expect you to supply the condoms, then take a few with him.
Aaah, the perks of casual sex.