Q.
I am dating a younger man, much younger. I am 17 years older than he
is. I look and feel very young for my age, that’s why I always attract younger guys. Many people I know give me shit
about this, they wind me up and always tell me the negative aspects of dating such a young man. I think you
could be the one to help me put my mind at ease. Keep in mind this young man is extremely mature for his age and
we get along perfectly. 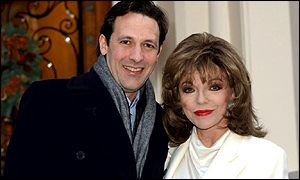 Couples with a BIG age difference ^

A.
I may sound like a hippie when I say this, but we only live once, so get it
while you can. I find it really revolting
that older men, like Michael Douglas, Mick Jagger, Rod Stewart, Donald Trump and many other
old geezers can marry/fuck/buy women
half their age, but no one scoffs at that, instead they get their ego’s
stroked "nice one!". Yet when older women
like Demi Moore, Madonna, Joan Collins and Cameron Diaz marry/date younger
men, they get pissed on by a shower
of doubt and criticism. You go girl, do what you want and the next time
someone hisses at you about seeing a
firm young man, tell them: "you’re only as young as the man you feel".

Q.
After 3 years of the same stuff, my girlfriend and I need to find something
new in our sex life. We have been through all the positions and toys but when I
had the idea of another girl, she yelled at me as if I killed someone. how do I
convince her to allow a third party into our bedroom?

Threesomes can be fun if everyone is cool about it ^

I have been seeing this hot guy now for a month and sometimes I sleep over his
house (and vice versa) and this sometimes turns into long weekends in bed.
The only problem I have is I have no idea how to fart around him.
I mean, my bathroom is right next to the bed room and if I let one rip,
he would surely hear it. By the end of the weekend, I feel like a floatation
device from holding all that gas in. It gets so bad that I don’t even want
to screw because I’m afraid all that poking and prodding inside me will
push out all those saved up farts. I am serious about this,
I know it sounds silly, but I am going crazy. How long does one have to
wait to fart out loud around a lover? I mean, everyone farts right?
Gassy Gail

When can one play the fart card, good question. I suppose you have to wait
until the premiere of the awkward "I love you" comes up. First get comfortable
with the "Love" part,
then once you are both in love and have admitted you are in love verbally,
you can break wind. Men think that women don’t fart. They are always shocked
when it happens for the first time. Pussy farts seem to go over without
even an eyebrow being raised but just plain farting is for some reason a
complete turn off (unless you are in West Virginia). You could try the one
cheek sneak, but never on a flat surface (this only works on a pillow or soft
fluffy sofa).
Try having a radio in your bathroom (and bring it to his as well) to blast
out some loud rock music (ac/dc perhaps) to play when you go to the toilet. Just let
‘er rip when the music is loud and no one gets hurt (carry a small spray bottle of
perfume with you or a match). Avoid carbonated drinks, Indian food and any kind of
beans when you know you will see him. If it happens, just laugh about it and blame
the dog/cat/hamster or him if you have to. You could always make it fun by warning
him with the ever popular "Pull my finger".