I finally had the pleasure of not only seeing  Paul Weller  live in Concert, but getting to massage him as well. I have heard about Paul for years, most of the British bands I have massaged all rant and rave about the man, especially Oasis. They must be his biggest fans. When I massaged Oasis, they played the Stones, Beatles, but most of the time, they had Paul Weller on. Noel told me all about him, as I had never heard of him before. I have heard of his former band, The Jam, but have to admit that I don't have any of their records.

Some call him the MODFATHER of Rock and Roll, as in, his music is very MOD. The band he is touring with presently are incredible. When I first walked backstage, the bass player, Damon Minchella yelled "I met you backstage at Live 8!!". He was playing bass for the Who and I was massaging those guys that day.. Then the Drummer, Steve White said the same thing. He is the brother of Alan White, the former drummer of Oasis. You see, the Rock and Roll world is very small, so don't piss anyone off, especially me heh heh.

I was in the production office, waiting to see who would want a massage first and I noticed that every one kept coming in and ironing their clothes. The whole band was busy getting their kit ready for the show. Paul came in and said hello. He said he wanted a back rub,  so instead of getting on my massage table, he just sat his gorgeous self down and I started his rub down right there. He is in no way snobby or arrogant, he is really down to earth and cool. He was a bit sun burned as they just got back from Spain. I asked him casually what he thought about Frank Zappa. He said "I have no opinion about him at all, I have maybe heard one track of his my whole life, you see, they never played him on the radio in the UK, so I have nothing to say about him".  I think that is the first guitarist I have ever met who hadn't anything to say about Frank. Like Frank or not, everyone usually at least knows his stuff and has respect or at least an opinion about him. I was on a mission from that point on.

He over payed me and was very grateful for my massage. Then he got out a piece of paper and wrote the set list for the evening. I have never seen an artist write their own set list (some type it out) . His tour manager, Ken, who has been with him for years and years told me he does it every night and the set list is different every night, depending on his mood. Ken made me a copy of the set list:

Yes, those are the treasures that I love!   ^

After a few songs, my friend Martina came to the show and I got her backstage. We went to the front row and watched in awe.

Most of the audience here in Berlin were Brits that live and work here (some Irish as well) . The place was heaving and in heaven. Paul was in a great mood and on the ball. He gave it his ALL!!!!  I knew then what Noel was on about, how great he plays and his voice, oh God , how SEXY!!! It's a tad like Joe Cocker and Rod Stewart, but unique. An English bar tender I know here in Berlin was standing next to me, he pointed at Paul and said "He is the sexiest man on Earth!". I know DAM WELL the bar tender is married and far from gay, but Paul has this aura, like Bowie, that draws even hetro men in. His music and voice are THAT good. At one point his leather guitar strap broke, but he just carried on and held on and played the best he could until his guitar tech came on stage to sort it out. It seemed to me that the whole band never stopped smiling once. The guitarist, Steve Cradock, who also plays in the band called  Ocean Colour Scene  has every good reason to smile. His guitar solos were so sharp and tight, he sometimes stole the show. Don't even get me started about the bass player. Paul obviously knew what he was doing choosing that band to tour with. The bassist & drummer are in a band called The Players Lounge as well. 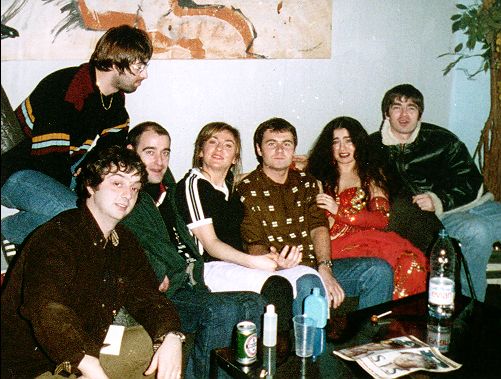 Note: in that pic of Oasis, I have Alan Whites hand in mine, massaging it, that chick in the red dress is a belly dancer, she was dancing for the opening act. Noel said "Dot, there's some old Slapper out in the hall, she speaks German, I can't bloody understand a fooking word she's on about, can you translate?". She asked if she could pose with the band. They said ok, but when she sat down next to Alan, her sequins pulled a few threads from Alan's sweater, he was not amused and that is why the chick has such an apologetic look on her mug. If you look closely, you can see the magazine cover that I had the band sign, which is now proudly displayed in my autograph section.

Steve the guitarist getting a rub down after the show ^

Ok, after the show, Martina drove me home to drop off my massage table and to change. I grabbed a copy of Frank Zappa's cd 'Joe's Garage' which is a good starter kit for someone who doesn't know Zappa. I also grabbed a copy of my Bitchfest cd  heh heh.

We arrived at the bar they were at and Steve, the drummer was talking to fans, I slipped a current copy of VIZ in his hand and his face lit up. He stopped talking to the fans and started going through the issue. Paul greeted Martina and I with a peck on the cheek and asked us what we wanted to drink. I was really tired and said "a Martina, no ice, no salt". Paul and Martina both said "WHAT?" and laughed at me. I was like OH!! Dam!! I mean a "Margareta, no ice, no salt" what the FUCK?! Martina on the brain!! Paul was so sweet, getting everyone drinks and even bringing them to his guests, like a good host does! I slipped the Zappa cd in his hand and said, I hope on tour you find a chance to give Frank a listen. He was really please. He assured me he would. The drummer and bass player are madly into Zappa, but Steve the guitarist and Paul both needed the started kit. After a couple drinks, I got the balls to give Paul my Bitchfest cd. I told him it's no big woop, just my cover band and to please listen to it when he was alone. He said "NO WAY! I will play it for the whole band and crew, really loudly"! ha ha.

I asked Paul if he checks his myspace.com page. He said "WOT? Never heard of it". He said he doesn't spend time online. I told him myspace may seem like a silly concept, but if the radio doesn't play his music, how are young people supposed to know about it? Myspace is the perfect way to get your music out there for all walks of life to enjoy (or loathe). He agreed in the end, but still, he does NOT have anything to do with his myspace profile. Some artists on there are really on there, but Paul is not one of them.

Steve the guitarist ( I have to keep saying that cause the drummer's name is Steve too). Steve got a foot rub in the bar and then decided it was my turn. I tell ya, guitarist of any kind always give great foot rubs, don't let them tell you otherwise

You see, I let Steve off easy with the price of his massage, so I guess he felt obligated to rub my feet YAY!  🙂

< Last but not least, Damon.

What a cool Mo Fo he is!! He LOVES to talk about music, so we just went on and on… Try to catch these guys live in concert if you can, you won't be disappointed.